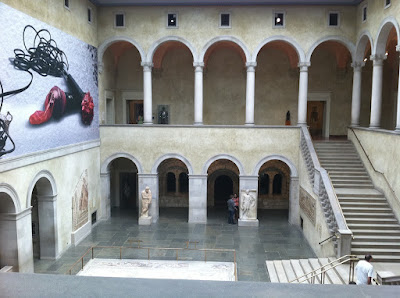 Courtyard of the Worcester Art Museum

I just went to Boston to go to the museums and had dinner with a friend. While I love the museums in Boston, for the research I was doing, it was not particularly productive. But it is always good to see great art, which there is plenty of between the Museum of Fine Arts, the Gardner Museum, and Harvard's Sackler Art Galleries. As I was about to leave Boston I thought, why don't I visit Worcester, where I have never been, to visit its renowned museum. A quick map search showed me how to get there, and after a quick visit to Harvard, off I went to Worcester. I was rewarded by seeing some great things, the Worcester Art Museum is well worth a visit. It is not small, but not large, sort of a good size, and has some very distinguished things. American Paintings are not my thing, but they do have a very choice collection of them. This post is my picking just a few things that struck me, this is hardly meant to be comprehensive. 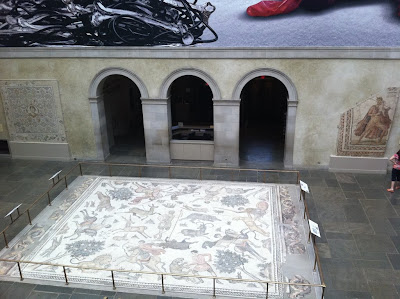 Another view of the courtyard, showing the justly famous mosaic from Antioch, the largest ancient Roman mosaic in this country. Dating the the Third Century A.D., it depicts animals threes, hunting, with a foliate border. On the floor of the central courtyard, it is under an enormous mural by a contemporary artist, juxtaposing the classical with the modern. I did not pay much attention the painting, while well done, it just did not capture my attention. 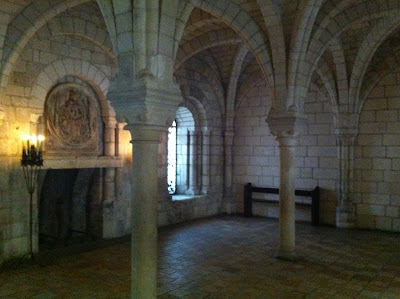 Chapter House, from the Benedictine priory of St. John Le Bas-Nueil.
West Central France, Limestone, 1150-1190
Off the Antioch Mosaic courtyard is this lovely room with columns and vaulted ceilings, something like what you see at the Cloisters in New York. I personally love period rooms and this is a great example of medieval architecture.

Limestone statue of Hetepheres,
Egyptian, Old Kingdom, early 5th Dynasty, ca 2440 B.C.
This extraordinary torso, epitomizes the spare elegance of early Egyptian sculpture. Here the slim female form is revealed under her thin dress with subtle modulations of the surface. You see here the human form at its most pared down, yet naturalistic depiction, something the Egyptians mastered. You see this form in Southeast Asian sculpture, and other early formative periods, but the Egyptians did this first. Being nearly life-size, this is among the finest Egyptian sculptures in America despite is fragmentary condition. 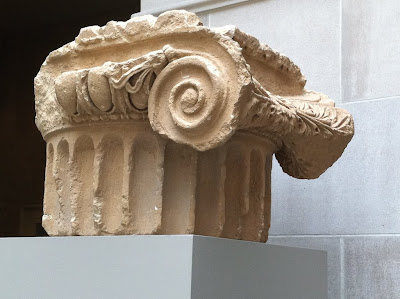 This capital is incorrectly identified in the museums label which describes it as being carved of marble, Roman, First Century A.D. Instead it is in fact limestone, and I think it is Greek from Taranto, and dating to the Fourth Century B.C. Quite a difference in rarity and importance since large scale architectural elements from Taranto are nearly unknown, I had never seen one before, so was surprised and happy to see this. Also a bit surprised that the museum so misunderstands it. 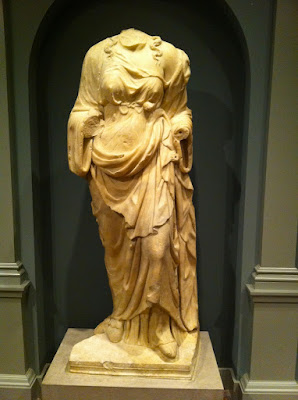 This marble statue is quite beautiful, and well preserved, and while lacking its head and lower arms is nonetheless quite intact for an ancient sculpture. Also being life size or just over life size, it is quite impressive with its beautifully detailed drapery revealing the voluptuous form underneath. A very good example of Classical sculpture at its best. 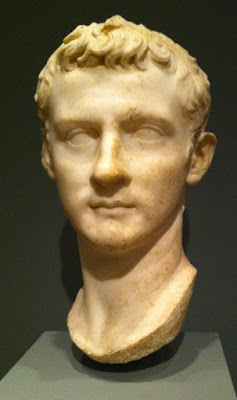 Marble portrait of Caligula, Roman, First Century A.D.
This remarkably intact and beautiful head is one of the best surviving portraits of Caligula, who for his fearsome reputation to us today, inspired some of the best Roman imperial portraits ever. Truly a beautiful idealized portrait, and a world class object. The surfaces are nearly perfectly preserved, the slight but beautiful traces of burial encrustation, the relatively free carving of the hair, and sensitive carving of the face, along with its completeness set this head apart. 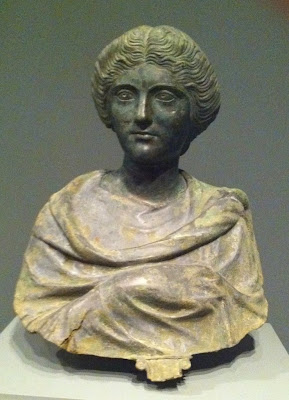 Bronze portrait bust of a woman. Roman, 2nd Century A.D.
This is another remarkable portrait, both for its completeness, its material bronze, and quality. Most ancient bronze sculpture was melted down by later peoples for the making of weapons, coinage etc. And then there are the vicissitudes of time and environment destroying bronze through corrosion. So to have a complete, intact, beautiful portrait of a young woman is quite rare. On the label it says this is possibly a daughter of Marcus Aurelius, which would fit the age and style of the bust, but one hardly needs to know who this is to appreciate its beauty. 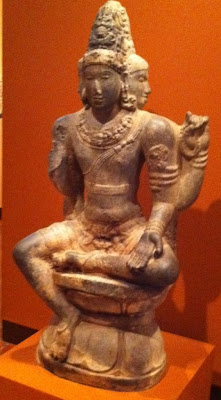 Granite statue of Shiva, Indian, Chola Period, 10th Century A.D.
This belongs to a small group of very beautiful, complete statues of the seated god Shiva, here with four faces, which are one of my favorite expressions of Indian Art. I first took notice of the type when Sotheby's was selling off the Albright Knox collection, and when I paid attention to the type, I have found only two others, one in the Metropolitan Museum in NY, and another one in the Boston Museum of Fine Arts. To the list I now have to add this one in Worcester. What is remarkable about this group is their consistency, while there are slight differences, they are all about the same size, and are uniformly beautifully carved. One thing I like about these figures and is common to the sculpture of the Chola period, is the slim waist and erect posture giving the figure an energetic feel. Another world class object. 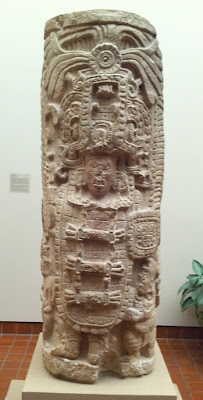 Limestone Stela, from State of Campeche, Mexico.
Maya, Late Classic, ca 850 A.D.
Unbeknownst to me, Worcester has a very fine Pre-Columbian collection, of which this is the star. A very rare thing, a complete stela of monumental size, this hardly exists in museums in this country. Even the Natural History Museum in New York and the Peabody at Harvard have only plaster casts of such monumental works, so to find this in Worcester was a surprise to me. 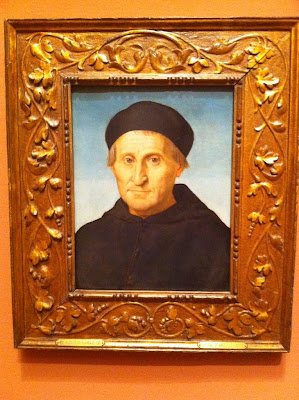 Portrait of an Ecclesiastic.
Atributed to Ridolfo del Ghirlandaio.
Italian, Florentine School, 1483-1561
Oil on wood panel.
And of course the Worcester Art Museum has great paintings, lots of them, in the tradition of an encyclopedic museum of European art, as any aspiring city such as Worcester in the early 20th Century had to have. I have a fondness for the beautifully painted portraits of the 15th to early 16th Century, and this is truly a great one. Despite the uncertainty of the identity of the subject, or even the artist, what is undeniable is the beauty and skill of the painting itself. 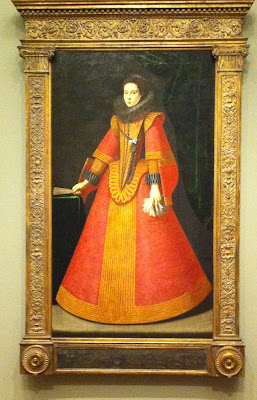 Portrait of a Young Noblewoman.
Unknown artist of the School of Madrid.
Spanish, 17th Century, Oil on canvas.

This impressive, large and beautiful painting is of a type that I particularly respond to, women of high rank in these stiff taffeta dresses encrusted with borders of gold, pearls and gems. This portrait is the red sister to the green taffeta dressed Archduchess in the Clark Institute in Williamstown Mass. Here the painter is unknown, the subject also, however, her youth, beauty and almost modern face, combined with the dramatic dress make for a striking work of art. 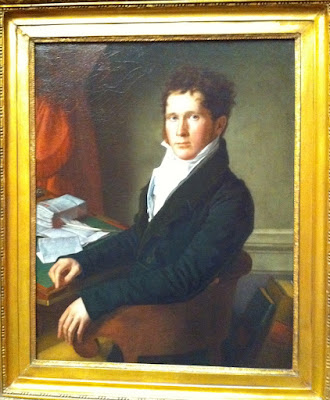 Portrait of Samson Vryling Stoddard Wilder, by John Vanderlyn
American, 1775-1852, oil on canvas.
Just a beautiful portrait of a handsome young man, who can resist that? It was painted in 1808-1812, when the painter and sitter were living in Paris, and you can see how the painter was influenced by the technically polished work of David and Ingres. 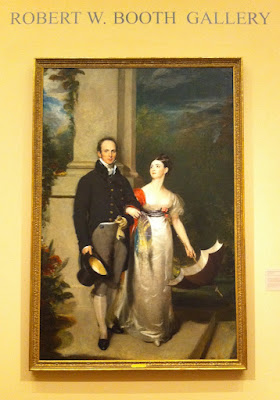 Portrait of Mr. and Mrs. James Dunlop
by Sir Thomas Lawrence, ca 1825
oil on canvas
Sir Thomas Lawrence was one of the most accomplished portrait painters of his day, his masterful brushstrokes speak to his tremendous skill at applying paint to canvas without being fussy but very exact and yet romantic. This is a particularly beautiful portrait of a lucky, prosperous, and apparently happily in love couple.

There is much much more in this gem of a museum, it is well worth a detour to see it. I have known about it for years, but never gotten to Worcester. My next post will be about another odd gem in this town, the Higgins Armory. Worcester is surprisingly rich in art.