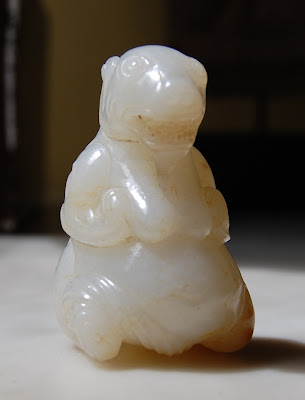 I usually post about places I go and what I see, however, I do buy objects from time to time, and am going to post about them as well, when so moved. I am moved at the moment by one of my latest purchases, a small white jade carving of a bear with pendulous human breasts. While a strange subject, the carving is compelling, it is an intense concentrated work of art. 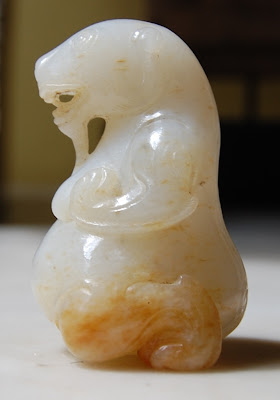 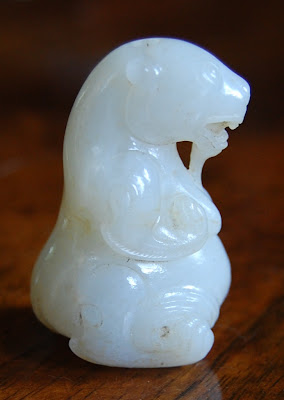 Standing just under two inches (48 mm) high, it is quite small, but incredibly finely carved with great attention to detail. The fur ruffs on the limbs and edge of jaw are incised with fine lines, the teeth are individually carved and even the tongue is freed, reaching from the bottom of the mouth to touch the palate in a fierce open expression. Most strange are the breasts, which are pushed together between its paws, as if being presented. Interestingly the piece is drilled through from the top of the head through its bottom, and may have been worn as a bead or ornament. It may have been a sleeve weight, fingered by a dignitary during long meetings.

Just what is going on here, and how to date this piece. I purchased it from a dealer in the City, Spencer Throckmorton, who told me he had it looked at by the current Chinese jade expert, Gu Fang, who gave it a Ching Dynasty date which would make it 18th Century at the earliest. There is no real scientific way to establish age of jade, but certain things about this, aside from its style of carving, conflict with that late date. There are traces of burial encrustation in the mouth, in the hole drilled through it. This makes no sense for such a late date, it would have been unlikely to have been buried, and to develop encrustation that adheres to an impermeable surface like jade takes a very long time. However for me, it is the style that argues most strongly for an earlier dating; this is a superb example of Eastern Chou through early Han Dynasty carving, say 500 to 200 or so B.C.

There are a number of other jade bears that share many features with this one, from the round eyes, to incised ruffs of fur, form, finish and scale. Two have been illustrated in catalogues of shows at Throckmorton Fine Arts, Enduring Art of Jade Age China, 2001, by Elisabeth Childs-Johnson, and its successor volume, Enduring Art of Jade Age China, Volume II, also by Childs-Johnson, NY, 2002. In the first volume number 50, is a Mythical Squatting bear, which while more elaborated than this, is somewhat comparable, and in the second volume, number 45 is titled a Performing Bear, which has the same one leg, one leg back stance as mine.
The text explains this piece: "The emergence of the bear as a popular image in Warring States and Han times may be associated with the emergent popularity of the legend of Chiyu, the God of War, who was envisioned as a human in the disguise of a bear skin wielding weapons.... and with the Impersonator of the Bear celebrated in the Zhou Li, or Rites of Zhou, who exorcised pestilence during the Great Exorcism rite, on the eve.... that inaugurated the New Year."

The deciding factor in dating this piece for me is its fierceness; this is no trifle, no mere trinket, this is a emphatic depiction of a transformational state. What we have here is a female shaman, transformed into a She Bear, presenting her human breasts to prove her human origin. She is in an ecstatic state, with the power to protect herself and commune with the spirits of the dead and formative powers. We know from the few cultures today in Korea and Mongolia, which are still shamanic, that female shamans are not uncommon, we know very little about this aspect of ancient China, but there is no reason to think it different then. The artist who carved this must themselves have been in this altered state of reality to capture this vision in such a hard difficult material.

I love Archaic Chinese jades, and one reason I can buy them is that the scholarship is so in flux. I am quite comfortable buying a piece which the experts will not endorse, as I have faith that scholarship will catch up. With Chinese art, I have seen this happen before, where objects coming out are at first disbelieved, but now are acknowledged as genuine. But one must be able to see for themselves, to take this type of risk, and as well, be willing to live with a mistake. This jade bear is one of the finest little things I own, and I look forward to continuing to research it, and find parallels for it.